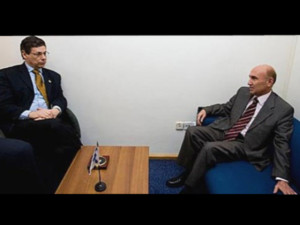 Israel is ready to send a letter like one Washington sent Islamabad over the killing of 24 Pakistani soldiers in order to mend ties with Turkey, a senior Israeli diplomat has said.

“I see some kind of improvement and opportunities,” Daniel Ayalon, Israel’s deputy foreign minister, told daily Hürriyet about Turkish-Israeli relations, which have been frozen since the Mavi Marmara raid that resulted in the killing of nine civilians by Israeli commandos in 2010.

When asked about the preconditions of reconciliation with Turkey, Ayalon said: “For instance, I can think of creating a way of solving this by adapting the American-Pakistani formula. Remember, recently there were 24 Pakistani soldiers killed by mistake by American forces, and the Americans sent a letter that was accepted in Pakistan. And I believe this could be a good platform to clear away the issue.” When asked whether this was an apology, he said: “Yes.” “If you read the text, I think that should be very clear to everyone. The American text that was sent to Pakistan, I think this is a good base to work [from]. This is what I suggest.”

“Right now, we have some lower level and we have some back channels,” Ayalon said, when asked about the communication they have with the Turkish side.